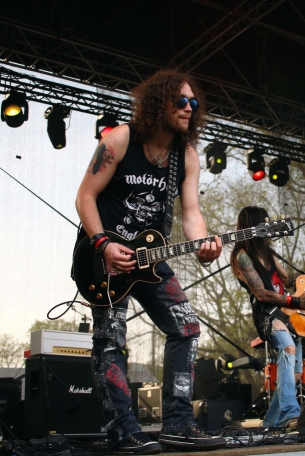 
FAVOURITE MUSICIANS: First of all, Slash, my biggest influence since my first steps on guitar. Doesn´t matter which band he was in, I like them all. Next band to mention is Alter Bridge, especially Myles Kennedy (my favorite vocalist) and Mark Tremonti (my favorite guitarist, when it comes to extremely fast playing).
Other bands and musicians I like are: Motörhead, Mötley Crüe, Iron Maiden, AC/DC, Bon Jovi, Airbourne, Steel Panther, Halestorm, Deep Purple, Whitesnake, ect.…..
FAVORITE RECORD:
My all time favorites are “Appetite for Destruction” and “One Day Remains”, but there are too many good records to mention them all
FAVORITE MOVIE: The Pick of Destiny, Spinal Tap, Hangover
FAVORITE FOOD: Pizza & Burger
FAVORITE DRINK: Coke (also Jack&Coke) ;)
WHAT I WANT THE WORLD 2 KNOW: Play Rock´n´Roll as loud as you can!

The journey started in my hometown Scheifling (Styria, AT). The first instrument that I played was the trombone, but I always wanted to play drums or guitar.
When I was 10 years old, I started learning classical guitar in school,
and two years later I got an electric guitar.
From there on, I took lessons for electric guitar additionally, and watched many videos of big bands like Guns N´ Roses, etc...
I tried to learn the songs of the bands, and so I found the well known video of GNR,
playing “Knocking on Heavens Door” at the tribute concert for Freddie Mercury in the Wembley Stadium.
When I saw Slash, playing his double-necked Gibson, something magical happened inside of me,
and I realized that I wanted to dedicate my life to the Rock´n´Roll!
At the age of 14 I went to the highschool, where I got guitar lessons too.
Luckily I found some guys in my class, which also wanted to form a band, so we rent a rehearsal room and my first band, called “Ravaged Rise”, was born.
The following years we played many concerts at local bars and events.
We also made a record, but unfortunately our ways split up, after we finished the highschool.
Fortunately I joined a rock/hard-rock coverband, called “ShockWavePalace” where I got my first experience with the classic rock songs.
We played some gigs at festivals, open-airs, and also private partys.
At this time I also played in two other bands, where we played at weddings, bars, and open airs.
In 2016, when I moved to Vienna to study electric guitar, my hard-rock band started again with new band members, but after some problems I decided to leave the band and search for a new one in Vienna.
After 1 ½ years of searching, I messaged Crazy Stiletto if he´s searching for a guitarist,
and after a few minutes, we talked to each other on the phone and he invited me to a rehearsal with his band.
From there on I´m a member of Stiletto, and I am very happy that I found these awesome guys!

On vocals, the one and only...

On drums, the man, who needs no introduction...